I attended the Ship Model Study day on Wednesday 22nd of February, at Barrack Street Museum Collections Unit. The collection has over ninety different models, some built by local amateurs enthusiast while other models crafted by ship builders who commissioned them to attract support and investment.

Over fifty people attended the study day, the majority, were local men who wanted to discuss and share their fascination for these models. It amazed me, how a model, a copy or imitation of a real ship could build discussions, sharing culture and establishing a romantic notion of Dundee’s shipping history. John Duncan described a nostalgic image of Dundee Docklands in his speech in 1911.[1]

“Strange ships from many strange places: huge swollen Dutch hulls that looked too lazy for anything but a canal, and lean sea-going ships; and full of foreign folk; swarthy creatures like pirates from the Spanish Main: Chinamen and Hindoos, and an occasional Lapp; lanky, blue-eyed Scandinavians talking together an unintelligible tongue. And queer rigging, and carving, the figureheads, and windows in the stern, the gilding, and the paint, and the whitewash, and the tar; and the moving water caught all this picturesqueness, and shook it into twisting Chinese dragons of liquid dancing fire. What a wonder it all was, what a delightful place for a Sunday afternoon.”[2]

The group engaged with each model in three stages: denotation, demonstration, and interpretation.[3] I questioned a few visitors about the appeal of a model ship and the responses were varied. Some interest was developed from working in the shipping industry, while others simply admired the craftsmanship and attention to detail. All agreed these models evoked the imagination of what it was like to live and work on the ships. The model ships allowed the construction of a narrative beyond the object. 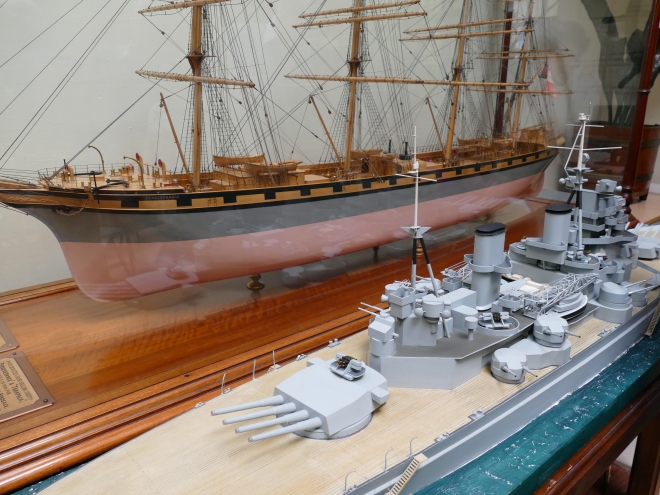 A small collection of carefully chosen ship models, representing ships that sailed from Dundee or tell a Dundee story. Will be soon be moved and displayed in the ‘Dundee and the World exhibition’ at the McManus galleries.