Searching for a serendipitous moment can be an engaging and active investigation. Opening up a playful space, allowing a new way of seeing and experiencing certain truths about the world. I have been walking and exploring the trace of the tramlines in Dundee, actively seeking and observing Serendipity. This is a record of these moments and the action I have taken.

Buying a map of Dundee from Ebay and finding the tramlines already sketched out, in felt tip. After I found this, I was certain I was on the right path and interesting things would be found along the way.

During my research I discovered audio recordings of the local history of Dundee in the Local History Library, two stories involved trams and each story was accompanied by a typed transcript which I read as I listened. The typist sometimes misunderstood the accent of the storyteller and they had written Fleetwood to Stargate. I was unable to locate where Fleetwood was on the map or what name it represented but by looking at the word Stargate phonetically. I considered that the typist should have written Stannergate – as stanner as has a hard ‘a’ in the word similar to Stargate. Later in the story, the tram had reached its destination at Broughty Ferry and Stannergate is situated midway on the route.

I love science fiction and I have always had a secret desire to build a Stargate. In that single moment, my dream of building a Stargate materialised from a thought to a possible reality.

During preliminary construction of the Stargate, I began to set out the blocks to build the structure. I selected 60 blocks to create the perfect size sculpture to enable a time traveller to walk through it. I began to consider the number 60 and its connections to time. With a little research, I found base 60 is a numeral system. Also known as a Sexagesimal system, using 60 as its base. It originated from the ancient Sumerians in the 3rd millennium BC and was passed down to the ancient Babylonians, and it is still used today to measure time, angles, and geographic coordinates. Serendipity had revealed itself within the construction of the Stargate, connecting time and space though a numeral system.

THE GHOST IN THE MACHINE

On the 4th of February, I uploaded an image onto my blog and then the post gets re-posted onto twitter and Facebook automatically. Today however something strange happened… 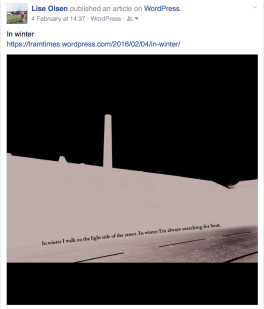 Facebook reminded me today that it prefers to use my image in negative. The element of luck has brought itself to my attention. The technologies I use today seem to have a tension between luck and vulnerability within the process.