A description of how I compose a poem in stages, using an inspirational quotation from Heidegger’s philosophy, a child’s imagination and a photography taken while walking, around the port edge in Dundee.

Thinking about words that represent a place. I had spoken to one of my neighbors who described a conversation with their granddaughter. She said;

“Granddad, I love to watch the princess castle float down the river at night, out of your living-room window.”

From the window, you can see the ‘Rowan Gorilla’, an oil rig located at Dundee’s port near Stannergate road. What words describe  ‘Castles in the Sky’? I begin to write the words with associated meaning and think about the Gaelic translation of Caisteal air an adhar.

“We live in a world where speech is an institution. For all these many common place utterances, we possess within ourselves ready-made meanings. They arouse in us only second order thoughts; these in turn, are translated into other words which demand from us no real effort of expression and will demand from our hearers no demand for comprehension…”[1]

I  decide to write some ready-made meanings, that come to mind.

SKY= Everywhere, Cloud, Soft, A change of, under a, Thunder, Big, Secrets,

I place the words in alphabetical order and during this process, the words and meanings expand.

The words collected are not an internal search from inside my soul but an outside reflection of a world. Engaging in a circular process within a world of meaning.[1] The continuous process moves between my understanding and my experience. Recognising when to stop is important as the process is infinite.

[1] “The “circle” in understanding belongs to the structure of meaning, and the latter phenomenon is rooted in the existential constitution of Dasein—that is, in the understanding which interprets. An entity for which, as Being-in-the-world, its Being is itself an issue, has, ontologically, a circular structure.” Heidegger, M (1962). Being and Time. 5th ed. New York: Harper & Row. P.195.

Amazed by the infinite possibilities of language, I remember reading a Lefebvre’s text.

“Could the infinite and finite be mere illusions, the one just as much as the other, and each as it were, the illusion of the other? They are mirages, reflections or refractions…”[1]

To create the illusion of movement, I think about the rhythms of my body.

“We know that a rhythm is slow or fast in relation to other rhythms.”[2]

The structure of the text is changed using repetition, the first word in line three, is repeated in line four and again in line six and seven. This creates a change in direction and I create change in repetition.

I move between words belonging to nature and industry using Heidegger’s quotation, the image and word association, to guide my thinking. 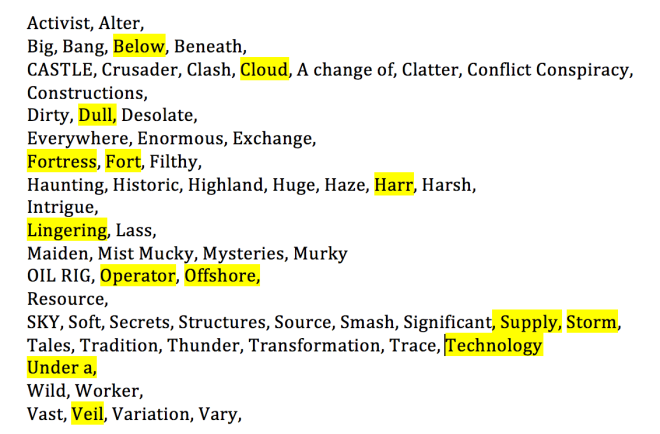 The poem is a representation of a place using words with associated and ready-made meanings. Different processes are used to discover words, expand context and meaning. Recognising when to stop is important, as the process has the illusion of being infinite. The impression of movement is inspired by rhythm and repetition. Presenting a space for difference using words associated with nature and industry.