I have recently started  (a Making the Most of Masters) student placement at the McManus, Dundee’s Art Gallery and Museum. Working on a project called ‘The People’s Story’, running as part of a programme organized by the museum’s Learning & Engagement Team to celebrate the 150th Anniversary of the McManus. The project will explore the relationship between Dundee’s diverse communities, the museum and its collections.

The McManus already has an established form of engagement with a wide range of groups, trustees and communities. Each group engages with the museum in a different way and I would like to consider, what is normal? How do these different audiences normally engage with the museum, the gallery space and interpretation of its artifacts?

Beginning a project is always a daunting task but I’m happy to be working with a fellow student, Stuart McAdam and the creative learning team.  To begin my journey, I have decided to treat it like a walk. ‘The People’s Story’ will allow for an exploration into the relationships between city and the museum. Giving me the resources to collect stories about Dundee and to continue my research, into the dynamic engagement of public and private spaces, using similar methodologies from previous projects involving the tramlines and edgelands of Dundee.

Quite unexpectedly, my first visit involved being followed by a Seagull who seemed to be heading in the same direction, the McManus, Dundee’s Art Gallery and Museum.

My initial walk through the McManus was to observe the building, space and collections. 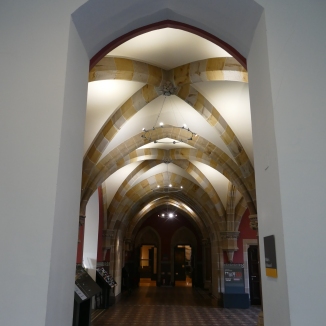 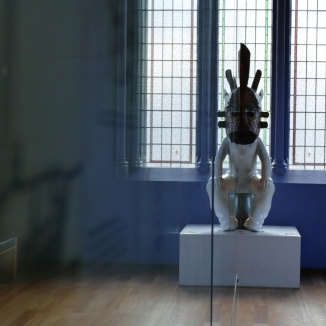 Everyday objects from seemingly insignificant past events have just as much validation as an object from a significant historical event. 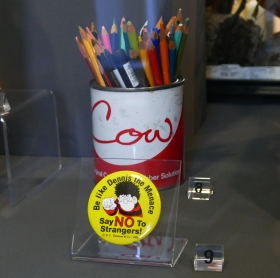 I noticed the reflections of objects, being mirrored upon the glass of the display cabinets. This reminded me of the process of memory and how people’s stories could place new memories, upon old memories projecting, spatially into a fourth dimension.[1] I wondered if a soundscape of stories collected around and about the McManus could also project into a new dimension.

I considered how a walk around a gallery, allowed the place to suggest appropriate sounds. I felt a sense of urgency moving in-between emotions and happenings. A sonic signature is an in-between space where the place is the symbol and the sound, the meaning.[2] The sound of a museum creates an in-between awareness. How people feel in the museum, or about its historical objects, could add something unique to our perception of the McManus and within that thought I found a new line of direction.

[1] “the process is that of continually compounding one and the same topomnesiacal resource.” Casey, E.S. (2002) Representing place: Landscape painting and maps. Minneapolis: University of Minnesota Press.p77

[2] “Thus for the poet in his ecstasy- or perhaps, agony- of the composition the trees are the symbols and the words are the meaning. He concentrates on the trees in order to get the words.” A.N Whitehead (1985). Symbolism: Its Meaning and Effect. New York: Fordham University Press. P12.